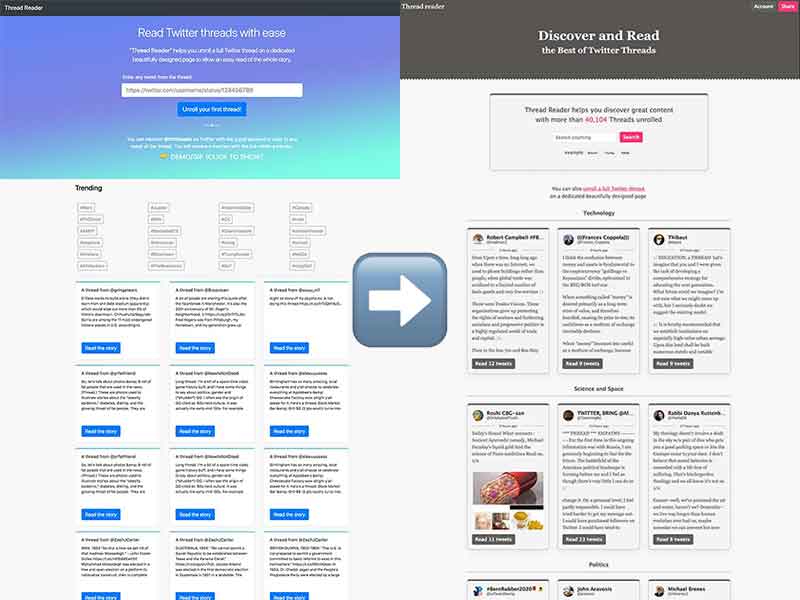 This is a follow up of my experiment with Thread Reader, for more context read the first part here and the second part here

Definition: A solo maker for me is a person that is working full time on his own project and get most of its revenues from it.

So a few months ago I decided to work full time on my own.

To be honest, I've always had trouble getting motivated to work for some other service or product than my own projects. And today I feel confident that I can figure it out and get enough money out of my work.

At that time Thread Reader was still very small and it was not the reason why I wanted to stop the usual office work. But still it help as I had some hopes about it.

So what is a typical day for me?

First I wake up at 7.50am, I'm a morning person and get work done easily in the morning. Plus as you may know I live in Vancouver, Canada so regarding time zones it is best for me to wake up early to answer to people, otherwise they could think I'm not responsive.

As you can deduce, I spend quite some time on user support. I get plenty of Direct Message on Twitter about Thread Reader: it is mostly questions about how it works, bug reports, requests for new features... picture of dogs... 🐶

I try my best to listen to my users and identify pain points.
I also spend some time to read my Twitter timeline to see what's up on Thread Reader, and reply if it makes sense.

The goal here is to make people understand that I am a real person and that I do care about their problems.

Then I check my TODO list for Thread Reader: I always have some bug to fix or small improvements. Most of the time I also have a bigger feature undergoing (last one was search and took 2 weeks).

On the side, I have other little projects not related to Thread Reader, mostly because I have to make some more money in case something goes wrong (in any kind of way) but also to keep practicing with other technologies.

My biggest fear is that Twitter block/prevent Thread Reader to work. It could be because of an update of their API for example, plenty of Apps already had to stop because of this.

This is a list of the existing feature on Thread Reader as well as tests that failed and my feelings about it.

The one that are still here

The core of the App and works quite well now. It has some trouble to get old Thread because Twitter API does not allow it. Historically the bot has been blocked by twitter because they considered it too spammy. I had to change a few things and now it seems to be ok.

Alerts allows people to subscribe to the unroll of a given author. This was to get people back on the website and it works very well. People love it. I added Twitter DM alerts for my Premium user (it is not possible to do it for everyone anyway because of some Twitter limitations regarding DM volume)

On Thread Reader you can ask a PDF archive for a given unroll so you can save it to your computer. It is with this feature that I introduced Premium plan for the first time. I personally think that these PDFs are awesome and very useful to save piece of information.

When I introduced the first premium feature I had to create a private user profile so people can get their PDF. I used that page to add other information like the list of every unroll they asked the bot, the subscriptions and more.

After sometime I realize that it was quite hard to have a homepage that could satisfy everyone. Some are more interested in politics and other in technology etc. So I decided to add a search feature, and made it the primary way to find content on the site. It is quite powerful but you must be premium to access all the options.

You can add any unroll to your private dashboard to find/read it later. I did not monitor anything about this one because I'm using it personally and I will not remove it anyway!

I tried to make a homepage that could satisfy everybody but it did not make much sense. This has been replaced by the search based homepage. The homepage still have a few selected content mostly for Google.

Storify was closing and I thought it would be nice to allow people to migrate their content to Thread Reader. I tried to build a Storify importer but their content was way too heterogeneous (not having only tweets). I was too confusing, only 5 persons try to use it.

At some point I was thinking that Thread Reader could aggregate some news websites (from their Twitter accounts) so you would have an overview of news. I was very happy with that feature and I personally used it every day. But in the end, real user did not.
I removed it from the website to keep the focus on Threads. I may retry this some day!

I thought that user would want to have a public page and pin a selection of their favorite threads on it.
As always I try to ask people first and see the reaction.
I did a Twitter poll and got more than 60% of people saying that they could use it. To day only 5 peoples use it (including me). It will be removed in the near future.

The most asked feature is to be able to unroll a thread with multiple authors (replies or comment, call it the way you want).

Problem is: it is not possible.
Twitter does not have a way to get replies for a given Tweet! To be honest, even the actual basic unroll of one author is already a quite dirty trick.
Also, that would mean that sometime the thread will split in two or more parts. Very hard to design a good interface for it.

Quite early in the life of Thread Reader I could see some traction. And the project scope changed from an experimentation to some more serious website.

So the name I came with and the design I did myself in the beginning were quite wrong.

For the name people were very confuse about how many t' you needed and how to pronounce it to talk about it with their friends.

I remembered some advice from a respectable person, and he always told me: "if you have to choose a name, make it say what the product do."

The design has been revisited by a real designer, the previous one was a little more catchy for sure but totally ugly too. 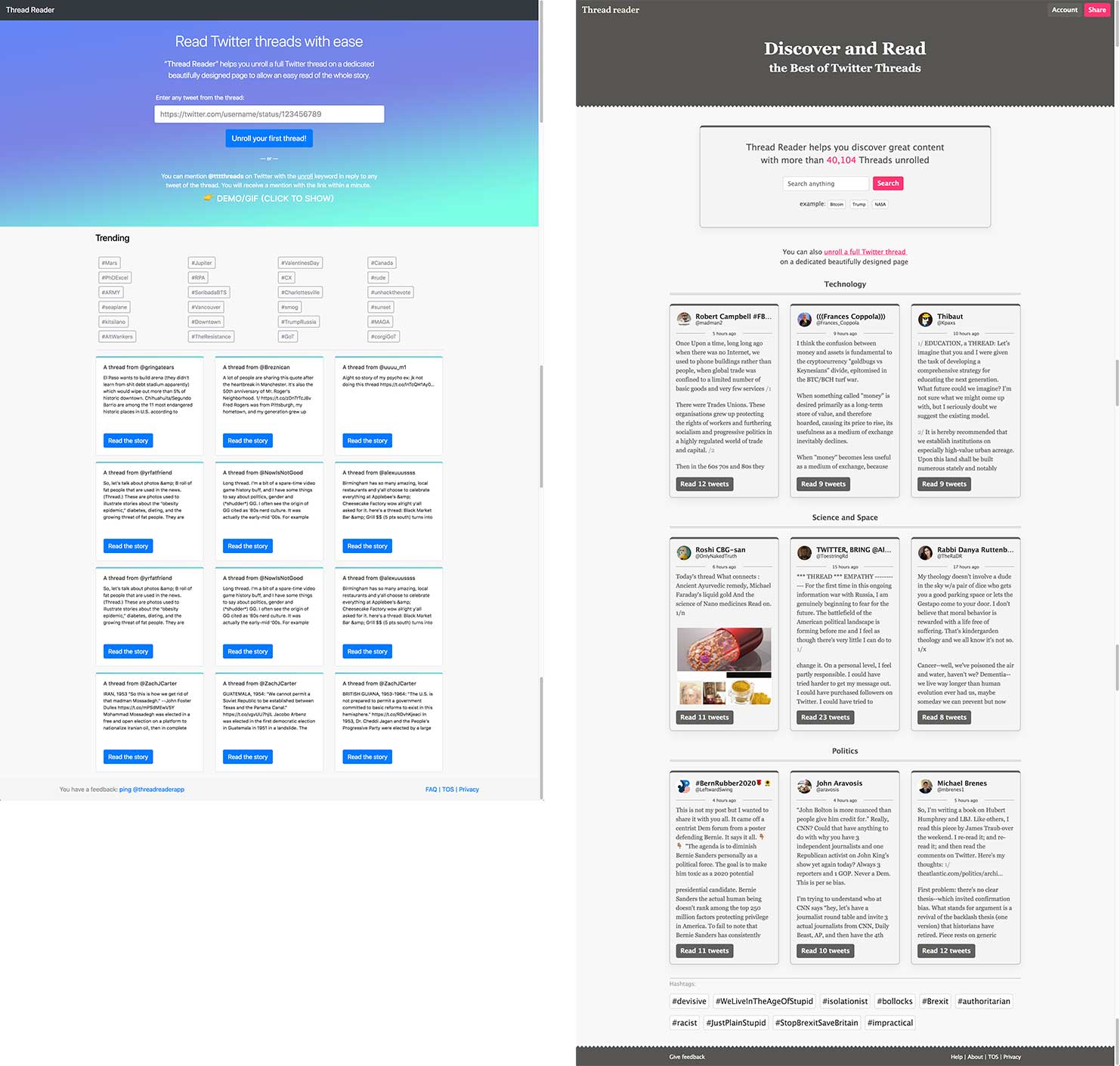 Thread Reader has premium membership. It was a three steps move.

Today my users can pay via Credit Card, Paypal or Patreon. Surprisingly or not, Paypal is the most used provider, something like 75%! Followed by... Patreon and only after that Credit Card.

I guess Credit Card payment still have a bad press on the internet.

As today: Monday, April the 9th I have 284 premium users. Most of them choose the yearly payment (thus saving 2 months)

Other source of income

I have some Google Ads running on the website, these are very dependent of the traffic.
It goes from $5 to $50 per day.

I subscribed to some services to help me manage all my TODO and support, it is about $30/month.
The server is around $50/month and the most expensive thing is sending email alerts: it varies from $50 to $100/month.

As today, I can live out of Thread Reader but it is not stable enough for me to be serene. I am thinking about other ways to get money and stabilize the whole thing.

That is why I'm looking for some monthly sponsorship: if you are interested read more here.

From the start, the website have seen 2.6 millions users and displayed 6.6 millions pages.

Thread Reader is a service working on top of Twitter so it is by definition very social. Someday nothing much happen, but all of a sudden out of nowhere: 800 persons/minutes goes on the website to read some buzzing content!

These days I'm very happy but in return I have a lot of support to do from newcomers.

On the social side @ThreadReaderApp which is the bot but also an account that I manage by hand from time to time has 20k followers and posted 50k+ status (mostly automated ones for sure!)

Everything is increasing linearly but that does not matter I don't need an exponential growth.

These are some raw numbers (April 9th 2018) that does not always mean anything:

When I started this project a few months ago I did not think it will grow so big, today as a solo maker I feel great, but still I have to work hard and make everything more sustainable.

My next step will be to find a monthly sponsorship and drop the Google Ads in return.

If you are interested in a month-to-month reporting you can check my updates on Patreon.com.
If you liked this post you can support me there too!