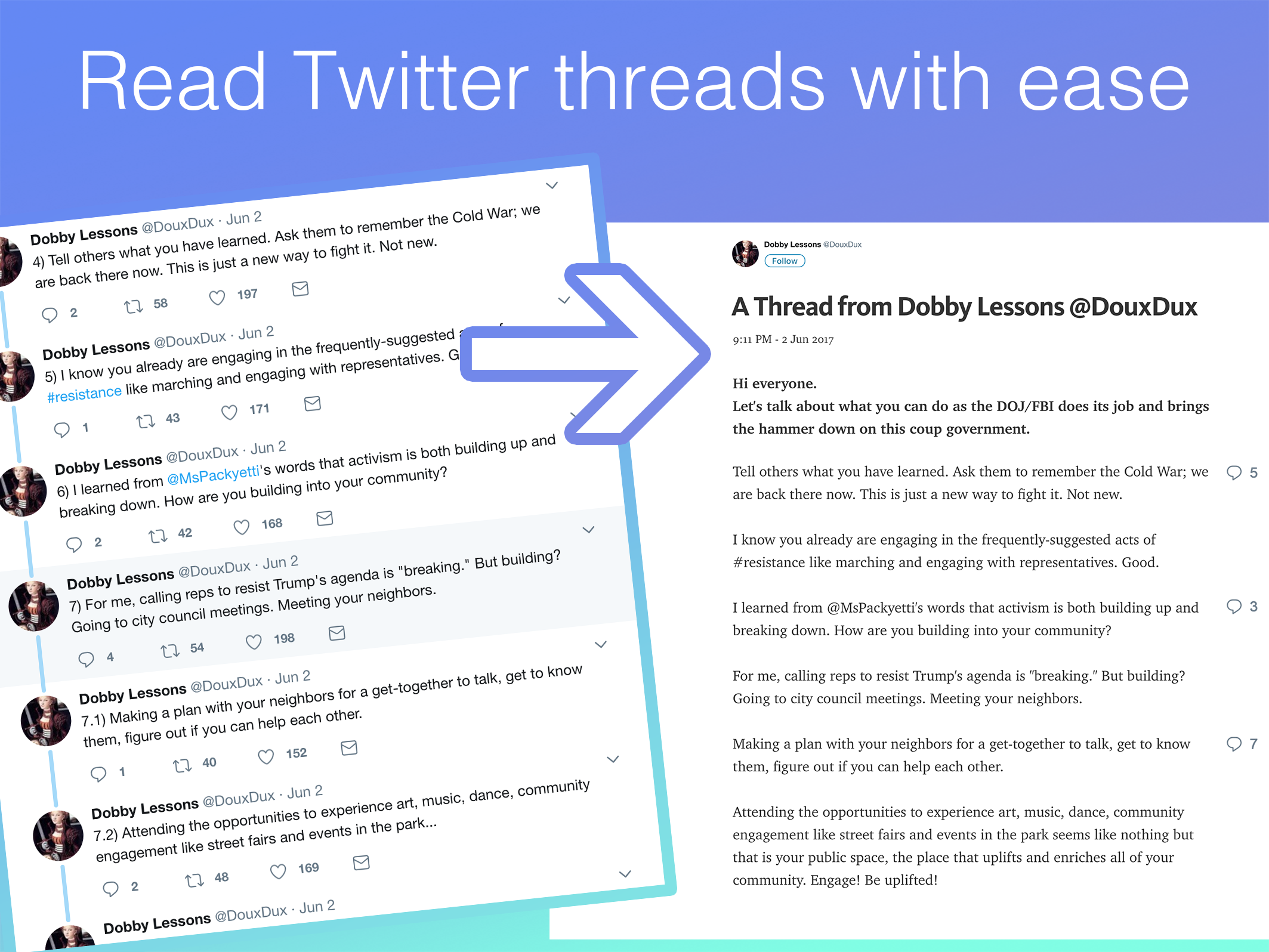 With this project, I wanted to show how easy it’s to build a functioning web service from the idea to the first sign of traction.

This post is not to brag about me or anything like that, but instead show you that you can do it too.

First I came up with a problem, it’s better if it’s a problem you personally have.
It does not have to be some game changing idea, start small. The objective is to find people that have the same problem as you.

My problem was that it’s a pain to read Twitter threads (or Tweetstorm) on the official Twitter website/app and I think that all the Tweets put one after another in a medium.com alike page could be better.

I made up a description of the idea plus a one-liner to check if it could interest anyone.
I will try to expose many people to that message and see how they react.

The base idea is to allow people to better read Twitter threads.
Let say one person needs to say more than can fit in a tweet, the way of doing that is to start a “thread”. A thread is a tweet followed by many replies to each others. So when you read the first one the others are linked and you can follow the full story, but in reality Twitter is not meant to be used that way, the user interface is less than optimal.
What about a service that helps you “unroll” a full Twitter thread on a dedicated beautifully designed page to allow an easy read of the whole story?
Want to test it follow => @ThreadReaderApp

For that specific idea, because it targets Twitter, I will use that same medium to start gather users.
But depending on your idea you could build a quick landing page to try to convince user with your message and ask for emails. To make a landing page you could use launchrock.com (mostly free with paying upgrades)

We need to prepare a minimum of graphic assets to make it credible. Of course nothing exists yet, so we will have to fake it.

To illustrate the service I will take a real Twitter thread on web and show a fake result that looks like the final page.
For that I will use medium.com as an inspiration (for the design side) and Photoshop to copy/paste elements from Twitter and make the illusion working. 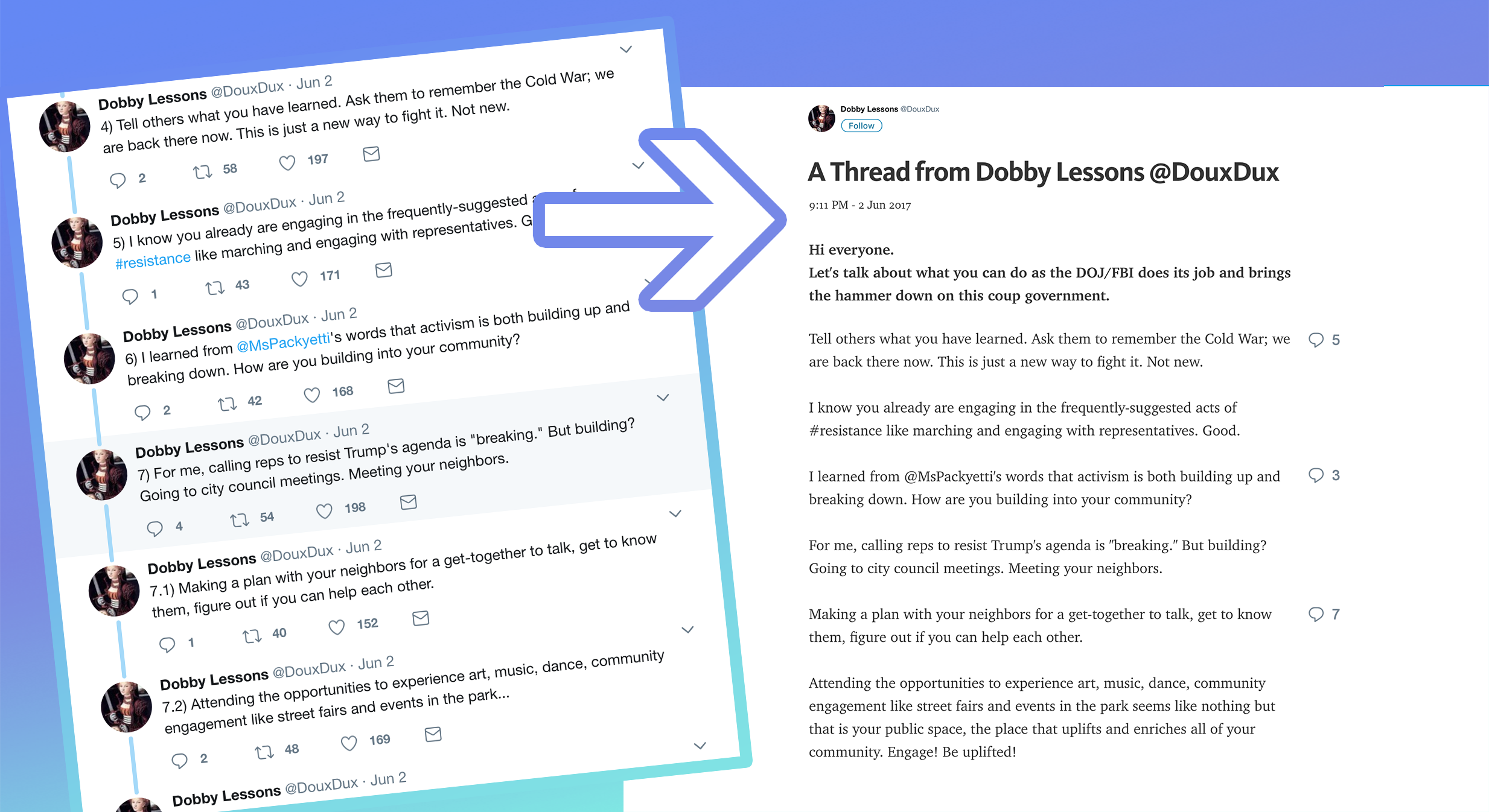 I am not a pro of Photoshop 😆

To get that material online I created a new Twitter account @ThreadReaderApp then use the bio, the header (for the image) and a Twitter thread to display the message.

The base idea that is meant to evolve is to allow people to better read twitter threads. Let say one person need to say more than can 1/x

So now we have our message ready and online, how can we reach potential users?
It’s quite tricky, I guess you don’t want to bother your friends and to be realistic they won’t be honest with you.

Where are you supposed to get those people?
Betalist.com (and alike) are ok but it has a selection process that could last a few months.

The solution is to think hard and find the right niche.
For Thread Reader I decided to target people using the #thread hashtag on Twitter!

You could use Google Ads to drive some customers on your landing and check the conversion rate (that’s another way to do it).

With the first positive user feedbacks I got, I decided to give that idea a chance!

During all the process you should stay close to your first users (prospects) and include them in the progress loop.

It could be with update on Twitter, email, polls or anything. We must build something with minimum effort so it would be easy to iterate and to deploy. At that point it’s allowed to be buggy, but it must be online.

My choice will be the LAMP stack with the Silex framework, Silex is a very minimal PHP framework. I chose it because I like to work with it, but also because it’s very close to raw PHP so you can understand the code (no specific framework code on our way).

Of course in our process we want to leverage the existing and do not reinvent the wheel we will choose an existing PHP library that will allow us to interact with Twitter.
The choice of a library could be tricky, the best is to check if the platform has an official version and if not, see if they recommend any. For Twitter, they list multiple PHP libraries.
So you have to check by yourself, see if the project is active, and how many stars it has on Github for example. I chose j7mbo/twitter-api-php after some testing.

This project is built live and you will see that, like any real project, we will encounter unexpected feasibility issues.

The next step is to get the replies to a specific tweet.

My opinion is that this feature should be exposed somewhere in the API, so let’s read the documentation.
…
Ok, I can not find anything talking about “replies” in the documentation, I’m quite sure I’m missing something but let’s check that on Google.

People suggest using the Search API with specifics queries to get tweets related to the one we want.
We have no choice, let’s try that.

During the building phase you’re going to have a lot of feature ideas.
DO NOT IMPLEMENT THEM
Note them in a todo/idea list but you should be focused on something minimal and go live instead of a bigger project that will never hit the server.

Let’s continue the code for now, a working proof of concept could be online soon, then it will be easy to iterate and add features.

The code quality is far from perfect but it’s not the goal here, refactoring will be fun and cheap as we don’t put many features in it. And to be honest in 90% of the time projects won’t succeed and you’re going to trash everything.

Trust me on this one.
You should fail fast.

Getting the data works!

Now it’s time to put that in a great design, then add some caching to prevent long loading time and Twitter API rate limitation.

For that I will look for a public free template with a medium.com look and built a static HTML+CSS page which I will integrate after.

After spending some time on the Internet looking for a free template, I realize that it’s not that easy, so I’m going to get some “inspiration” (cough copy cough) from medium.com

Design is always important so let’s use a good tool from the start: Bootstrap and use one of their example as a starting base
https://getbootstrap.com/examples/sticky-footer-navbar/

Now that the data are in the template, we need to put some basic caching in place. It’s mainly because the Twitter API is quite slow, and we do have quotas to respect too.

Expiry time has to be tweaked to get an optimal value, I would say between 3 and 5 minutes.

Be careful as the caching mechanism in this implementation is not proof to the dogpile effect and need some more work but it’s enough for a MVP.

We are almost ready to go live, let the user add some content to the site and it will be done.

Great the user can unroll his URL, now it’s time to test with few real use cases and check if everything is alright…

In this project the data is user generated, so we will encounter many edge cases. Either the user will do something wrong, or we have a real bug, in both cases we will have to help our users understand why they don’t get the expected result.

The way to handle that could be an error message saying that it does not seem to be a thread and to ask the user to make a report if he thinks it’s one indeed.

For a small PHP+MySQL MVP project you don’t need expensive server at start. I checked for you 000webhost.com hosting and it looks like it can do the trick.

I’ll let you check how you can push a project online, it’s not that complicated but you will have to pay a little to get a domain and a great service.

On my side I’ll use my personal server for now. If you have AWS it would do too of course.

I did prepare a few video about pushing a project online but because I already have my server it’s not relevant, so I decided to not publish it.

Unfortunately the twitter search API has major limitation that goes on our way:

Remember that working on a specific platform is always risky. We can hit platform limitations or even be banned or get our API point modified, that is the game.

Let’s do our last technical improvement: remove twitter search and work with timeline instead.

We also put in place a minimum of analytics, the choice of a KPI could be important too.
Here because it’s a website based service I will watch for users sessions (Google Analytics) and as a second KPI I’ll take the number of unrolled thread (as seen in the database).

At this point it misses many features: https, a domain name, display media, follow author, polish design, share the page, replies, favicon, extension version, trends and more, but we need to resist and take some time to communicate and ask for feedback.

I’m not a marketing guy, not at all.
But for this service, because it’s on Twitter, it seems easy to find a few growth hacks or dropping the buzzword: automated marketing.

Here are some idea I got, as usual it takes time to implement, so I will test it manually first:

That’s right, I’m taking some human time to contact people and unroll thread by hand to get the tool some traction. Also, it allows me to talk with the user and see if they are interested.
I spent about 2 × 3h to do that (per week).

Basically I search for "#thread" or "tweetstorm", and it’s not so easy to find great content (something that our bot will have to deal with)

As a rule of thumb we have to ask people to pay early to see if the service has value, but for this service I decided to offer it for free.

Now that we are on tracks and can iterate fast, let’s ask user for feedbacks and start implements new features.

You should contact every user you have and ask them for feedback,
I did contact many of them on Twitter and I got some interesting thoughts:

In the next episode we will talk more in depth about communication and traction.

This is an example of my TODO list at some point,
it’s here to show you that you don’t have to worry about having many things to do, it goes by:

Edit 2020, unfortunately those video are outdated, so I've deleted them